What does social media use during the 2019 federal election tell us about far-right parties in Australia? 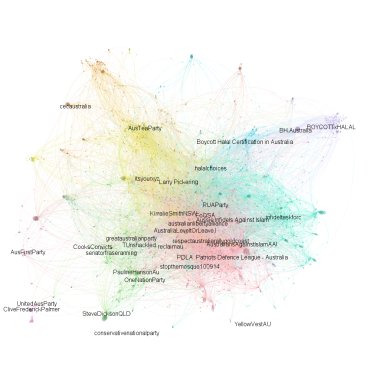 The use of internet technologies, such as social media, are closely intertwined with how political parties organise and campaign today. This embrace of the internet has an impact on the organising logics and practices of parties, facilitating the formation of loose supporter networks and limited investment in party structures. It also provides researchers new ways to study Australian parties, which are notoriously secretive when it comes to their internal operations.

In my recent article published in Information, Communication & Society, I analyse the use of Facebook and Twitter by four Australian political parties at the time of the 2019 federal election: Pauline Hanson’s One Nation (PHON), Fraser Anning’s Conservative National Party (FACNP), Yellow Vest Australia (YVA) and the United Australia Party (UAP). Analysis of their digital trace data allows me to map what, if any, relationship they have to the broader Australian far right, and to gain an insight into their organising dynamics.

On both Facebook and Twitter, the networks of the four parties show little evidence of regional or local party units. What regional units are present are noticeably marginalised in favour of federal party elites (namely party leaders). The apparent lack of organisational complexity is a major campaigning inhibitor for these parties, given the importance of local organising to electoral breakthrough and persistence.

The predominance of a select number of federal party elites suggests that, despite the increased participatory potential of internet technologies like social media, digitalisation has seen a reproduction of extant party hierarchies and vertical organising. The concentration of organisational power in the national party, and particularly the party leaders, also presents significant problems in terms of organisational sustainability in the context of leadership renewal.

The prominence of anti-mosque campaigns in the networks also point to key entry points and spaces of recruitment and mobilisation, particularly for PHON, FACNP and YVA. All three of these parties had recruited election candidates from such campaigns, underlying the relationship between anti-Islam protests and these parties.

The UAP however is markedly isolated. Its lack of integration into the broader network indicates that the party’s reproduction of far-right symbols and recruitment of former PHON officials and candidates is the product of opportunism, rather than ideology.

Networks aside, how do these parties use the platforms? What kind of content are they sharing to their pages, and what does it suggest about their organising practices?

The most striking finding is the lack of content relating to party organisation. Despite the context of a federal election, only a handful of posts during the campaign sought to solicit donations, recruit new members, or mobilise supporters for campaign events.

Instead, the primary function of the platforms was the construction and dissemination of interpretive frames relating to specific issues. Namely, Islam and the Australian Labor Party.

The anti-Islam framing is to be expected. PHON, FACNP and YVA all sought to construct Islam and Muslims as a ‘threat’ to the Australian ‘way of life’, to varying degrees. Where the FACNP and YVA frame it in terms of immutable cultural incompatibility, PHON’s framing focused on potential threat of terrorism.

The UAP did not rely on Islamophobic framing, but there remains a distinctly nativist flavour to the party’s election campaign. Instead, the UAP developed anti-Chinese framing, focusing on the need to block Chinese ownership of Australian infrastructure such as ports.

Where the four parties are united is in their use of a specific anti-elite frame, focusing on the Australian Labor Party, constructed as out of touch elites who will ‘sell out’ Australia.

The anti-ALP framing was heavily reliant on the Liberal-National Coalition’s own re-election platform, with a particular emphasis on the ‘death tax’ and franking credits debate. In this respect it suggests that rather than original policy or ideological positions, much of the parties’ content is simply a radicalisation of existing centre-right positions (Mudde, 2010).

Coming back to the question of party organisation, while the decision to contest the election is obviously a party-specific form of collective action, their emphasis on mobilising support around specific interpretive frames resembles ‘in more than one way the modus operandi of social movements’ (Pirro, 2019, p. 785).

The emphasis on frame mobilisation, combined with the apparent lack of investment in party infrastructure and limited emphasis on formal membership vis-à-vis recruitment, points to some degree of hybrid organising practices present in the four parties. Whether this is the result of deliberate organisational considerations, or simply a consequence of limited party size and resources, remains unclear.

Regardless, it suggests that internet communication, and in particular social media, are vital to the organisational capabilities of these parties, and will continue to play a key role in developing their party organisations.

Jordan McSwiney, is a PhD candidate in the Department of Government and International Relations, University of Sydney.