Throughout Labor’s final term in office, the casual observer might easily have concluded that most of the government’s attention was taken up by leadership crises. Yet, despite the drama, parliament under Julia Gillard produced a similar amount of legislation to John Howard’s final term, including big-ticket reforms such as the price on carbon and the National Disability Insurance Scheme. Clearly, policy making goes on in the background even during crises such as those that engulfed the Labor Party during Gillard’s prime ministership.

How then do we identify these more substantial developments in policy and cut through the political noise that is the relentless media cycle?

In our recent book Policy Agendas in Australia, we systematically coded all legislation, executive speeches, opposition questions, media and public opinion polls going back, in some cases, almost 50 years. This massive coding exercise followed the international standards of the Policy Agendas Project and Comparative Agenda’s Project coding scheme, using 22 major and over 250 minor codes. Analysing the data provides new insights into how the government allocates its attention over time. (You can find the full data set here)

Our approach to studying the policy agenda is a radical departure from the traditional route of tracing Australian political history through sequences of events, the crises and personalities involved, or picking out those policies which proved to be historically important and trying to explain how they came about. We examine the attention devoted to different policy areas, regardless of how important these topics subsequently prove to be.  We look at the everyday politics as well as the drama

What do we find?

We discover that the nature of the Australian policy agenda has changed over time. We find increases in legislative attention to health, social welfare, immigration and the environment in the last decade compared with the 1970s.

No great surprise there, perhaps; but tracking these changes over time, and observing the peaks and valleys in changing attention, show that Australia is like other democratic countries. Policy makers around the world are responding to similar pressures ‒ ageing populations, technological developments in health care, and the like. Meanwhile, we find declines in attention to agriculture and defence.

Figures 1 and 2 graph two issues. Health shows an increase over time with peaks and troughs. Notice that at times speeches and legislative attention rise and fall together, but sometimes legislation increases whilst speech declines. Politicians do not always talk about what they are doing.

Since the Hawke/Keating era, attention to agriculture, once a staple of Australian politics, has slumped from levels far higher than other democratic countries to a level more on par with most other OECD countries. 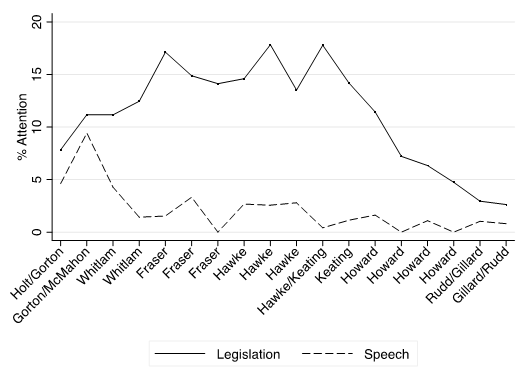 We also examine public opinion. Our analysis confirms comparative research, demonstrating that the public consistently identifies a small number of issues as important. Across the last 30 years, the most important long-term issues are economics, health and education. It would be reasonable to argue that these are, objectively speaking, among the most important issues for government to address. But we also see several short-term influences. Labour and immigration, the environment and defence, have periodically emerged as important issues for the public, before (as in the case of defence and the environment) fading from attention.

Furthermore, we see a broad correspondence between economic conditions and the importance accorded to them, both in Australia and comparatively. We also see public opinion shift predictably in response to crises such as September 11.

Indeed we also see that governments tend to respond to the public’s priorities. There is a clear, if not perfect, link between opinion and policy. This should give us some cause for optimism about Australian democracy.

Another interesting element is how Australia compares to other countries. The table below shows the four most important issues by country. We can see here the pragmatic orientation of Australian public opinion compared to the other countries here. Whilst economics is a major issue in all four countries, it is noticeable that in Australia, unlike elsewhere, the other three are all social or welfare issues.

Note: US and UK data accessed through the Policy Agendas Project and British Policy Agendas websites; Spanish data from Chaqués-Bonafont and Palau (2011). UK data only relates to the most important issue. The Spanish coding scheme differs: justice and crime takes in domestic terrorism, government operations includes corruption. The results may also be skewed because Australians were given the option of identifying the three most important problems in the 1992–2002 period. 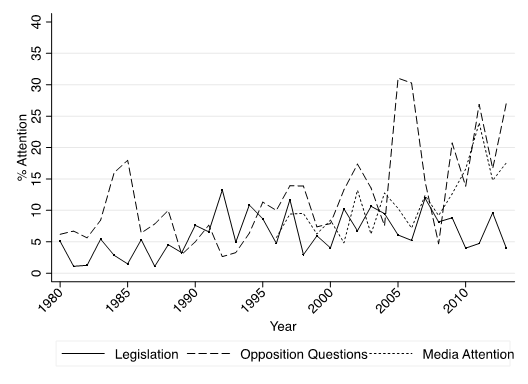 Figure 3. Attention to Labour and Immigration.

These and many other trends are documented in our book. Such trends can only be identified by a careful coding and analysis of the data. We have now made our data publicly available through the Comparative Agendas Project website This can be used comparatively. We hope this will be an important resource for scholars to better understand policy agendas in Australia for decades to come.

Aaron Martin is Senior Lecturer in Politics at Melbourne University

← The logic of policy-motivated parties
Policy before party: women and political collaboration →