Tories, television and the drivers of party change

A new study on how political parties deal with changing communications technology revives unresolved debates about the drivers of party change. Can parties choose how and when to adapt to technological change – and if so, just who within the party structures performs this adaptive task? Or do all parties, as similar institutions, have basically the same changes imposed on them, in the same way, by the same vast exogenous systemic change? 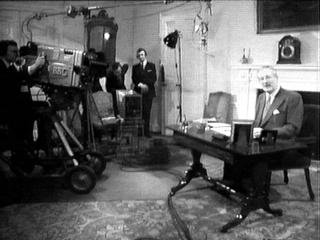 Anthony Ridge-Newman’s study of the British Conservative Party’s response to the rise of television during its long period in government from 1951-1964 throws up some fascinating evidence about the adaptive capacity of parties.

Consider the movie “TV Can Tell It”, produced by the Conservative Central Office (CCO) in 1954. It aimed to instruct party supporters about how to watch the new medium of television, and to invite them to contribute to future political broadcasts. Employing the ‘more familiar’ medium of film, the party elite sought to educate its members about the ‘encroaching spectre of political television,’ Ridge-Newman observes, and to engage them in the change process.

In the same spirit was the CCO’s 1951 pamphlet “Taking on Television,” a ‘comprehensive introduction to the world of television’ distributed to party members and organisers to help them generate their own party broadcasts. The pamphlet described production requirements – dress, make-up, microphones, cameras, gesture, lighting and so on – and helpfully provided the addresses of London studios.

Ridge-Newman sees these efforts as early steps by the recently re-elected Conservative government under Churchill to ‘integrate television culture with its own organisation and … psyche’. They also represent, he observes, efforts by the CCO to exert its influence throughout the party, ‘thus signalling that (the party’s) organisational and political culture was expected to adapt in line with political inevitabilities associated with evolutions in broadcasting technology.’

So here are some examples of agentic party adaptation to the biggest new communications technology of the twentieth century. TV implicitly was a democratising force, and teaching party members about TV, according to the smartest brains in the CCO in the early 1950s, could strengthen the party’s mass membership structure (p101).

Alas, exactly the reverse happened. As the 1960s rolled around, with television an ever-bigger presence in the party’s communications repertoire, CCO’s belief in the democratising character of television faded. From 1960 onwards, as the medium matured and as the CCO got better at dealing with it, Ridge-Newman observes the emergence of ‘a significant and orchestrated divide in party culture … between the professionalised elites at the top of the party hierarchy, and the more emasculated ordinary participants at the party grassroots.’ (142) Here we see the roots of the party malaise, now routinely identified by scholarship: declining membership; centralised, hollowed-out structures; ‘parties without partisans’; elite careerism; and professionalisation.

Tory adaptation to TV, in other words, was experimental, provisional. It was also path-dependent. Having undertaken a massive and successful recruitment drive in 1946 (netting more than a million new members and raising a one million pound fighting fund), CCO understandably failed to recognise the disruptive potential of the new broadcasting technology. But then, having grasped that TV was more about centralisation than democratic empowerment, CCO set out on a new path with vigor.

Moreover, professionalisation and centralisation emasculated more than just the grassroots members. The party’s MPs and ministers were also required to ‘fall into line’ (136). The archival record provides ample evidence of humble deference towards the Cabinet and Prime Minister, but there was a more subterranean contest underway as well. When in 1957 CCO noted that ministers were not preparing adequately for their TV appearances, they issued instructions requiring ministers to be brief and to stick to the ‘central message and target audience.’

Ridge-Newton comments: “The party was beginning to understand the need for their politicians to be brief – speaking in bullet points, which would later be known as sounds bites.” (95)

Before long, CCO was urging further campaign centralisation: ‘The Prime Minister must take much more part in the conduct of the campaigns than has been the practice in the past. … The Prime Minister should do the last broadcast himself, if possible alone … The manifesto must be launched with a major press conference which should be taken by the prime minister …’ (135-6).

Ridge-Newman’s research sits in the mainstream of party scholarship insofar as it takes a single party as its unit of analysis. He acknowledges his debt to Tim Bale’s landmark 2012 analysis of change in the Conservative Party.  (He also stood as a Conservative Party candidate in a safe Labour seat in Wales in the 2010 general election, as he described in his 2014 study of David Cameron.)

Implicit in this one-party approach is that party change can best be viewed as an endogenous process. But even in this book we find evidence that intra-party dynamics were complemented by inter-party factors – especially, by the competitive structure of the electoral system, which places the CCO in an endless, do or die battle with their Labour Party counterparts in Transport House. Neither can afford to let the other out of its sight and, as we have observed in Australia, will strive to match, surpass or even copy the adaptive innovations of its rival. Thus the CCO constantly monitored TV performances by Labour Party politicians, convinced that the ‘socialists’ displayed a superior grasp of TV techniques (76).

Ridge-Newman states in his preface, that the advent of television predates his birth by ‘many decades.’ That is, he does not come to this topic from lived experience. His intensive reading of the Conservative Party archive in Oxford’s Bodleian Library is a model – despite his occasional stylistic clunkiness – for the use of documentary evidence to identify changing organisational behaviour.

So it is a shame he provides so little information about the individuals who ran CCO – not just the various Lords and Viscounts at the top of the pile but the paid staff as well. Ridge-Newman describes a five-hour TV training course provided to the party’s regional candidates and supporters in 1956 by “Brigadier Hinchcliffe and Mrs Crum-Ewing of CCO.” Is it just me, or is there a slight whiff of Monty Python here?

But seriously, what were the backgrounds and political experience of these adaptive professionalising CCO staff? And how did these shape their practice, in an organisation that was cautious and heavily bureaucratic, but ruthlessly focussed on electoral success? Unfortunately the CCO is pushed into the background by the book’s structure, which is organised around Prime Ministers with chapters devoted to ‘Churchill’s Conservatives’, ‘Eden’s Conservatives’ and ‘Macmillan’s Conservatives.’ As the detailed research makes clear, it was the CCO, not the PM, which was really driving the response to TV and yet they remain largely anonymous in this account.

Stephen Mills is a Senior lecturer at the University of Sydney

Ridge-Newman, Anthony (2017), The Tories and Television 1951-1964: Broadcasting an Elite, London: Macmillan (Palgrave Studies in the History of the Media)

← Election Nerds: The Budget and elections overseas
Representation by numbers: A statistical approach to political biography →