Why the mistrust? How elite and popular perceptions of electoral integrity diverge in Australia

Many commentators lamented the ‘really long, really boring’ election campaign leading up to the Australian federal election of 2 July 2016. But despite complaints, the contest transformed into a nail-biting affair. The closeness of the race and the delay of the final results by four weeks conjured up nightmares of a hung parliament and sowed confusion about the procedures. 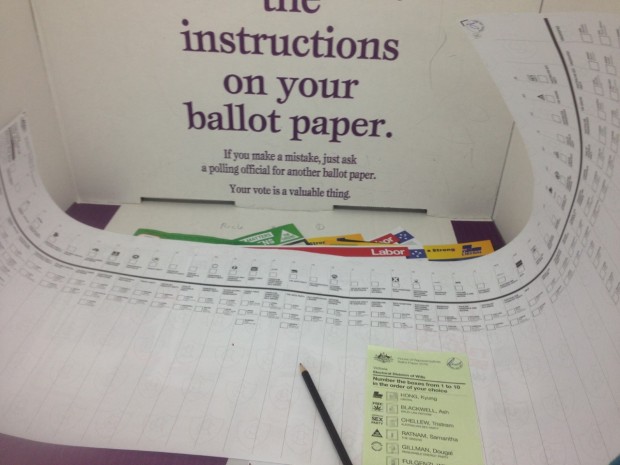 Tight election results and delayed tabulation of the vote count are two factors that often simultaneously undermine electoral integrity and erode popular trust in the fairness of the process.  In Gabon, for instance, the 2016 presidential election returned the long-time incumbent President Ondimba with a wafer-thin margin of under 6000 ballots. The slim margin of victory prompted the opposition to dispute the results, leading to two days of protests and deadly violence in the country. And in the 2014 Afghan election, a delay in results was only the first sign of alleged widespread fraud that necessitated a comprehensive audit of all votes.

Now, Australia is no Gabon or Afghanistan, nevertheless views on the matter of electoral integrity diverge to a surprising degree. On the one hand, there are claims that fraudulent activities such as multiple voting are rampant and severely undermine the integrity of Australian elections (see also here, here, and here). On the other hand, there are those who assert that such claims are grossly exaggerated and Australian elections are very well run (see here, here, and here).

This divergence in perceptions is to a large extent driven by an ongoing political battle over voter ID laws, which is not dissimilar to the controversy between claims of voter fraud and voter suppression in the US. Still, it is an important and open question how closely Australian elections adhere to international standards of electoral integrity. Even the head of the Australian Electoral Commission (AEC) is concerned that standards might be slipping.

Two new data sources developed by the Electoral Integrity Project, based at The University of Sydney and Harvard University, can shed light on these issues. Combined together, they show a stark divergence between ‘expert’ and ‘popular’ perceptions of the quality of elections.

The first data source is the Perceptions of Electoral Integrity (PEI) expert survey. This comprehensive survey of more than 2,700 social scientists ranks the integrity of elections globally, identifying numerous polls beset by gerrymandered boundaries, restrictions on the free press, ballot box fraud, violence, and the abuse of money in politics. In total, 49 indicators are assessed over eleven sub-dimensions of electoral integrity and compiled to an overall additive ‘PEI Index’ ranging from 0 (lowest integrity) to 100 (highest integrity). The latest results of the fifth wave of the PEI survey (PEI 5.0) have just been released in the ‘The Year in Elections, 2016-2017’ report, and allow comparing Australia with 157 other countries.

The election experts evaluated both the 2013 and 2016 Australian elections as having ‘high’, bordering on ‘very high’ integrity (PEI Index of 70 out of 100). The country ranks 28th in electoral integrity worldwide and closely matches or exceeds the level of integrity in other Anglo-Saxon democracies, such as Canada, the United Kingdom, New Zealand, and the United States (see Figure 1). 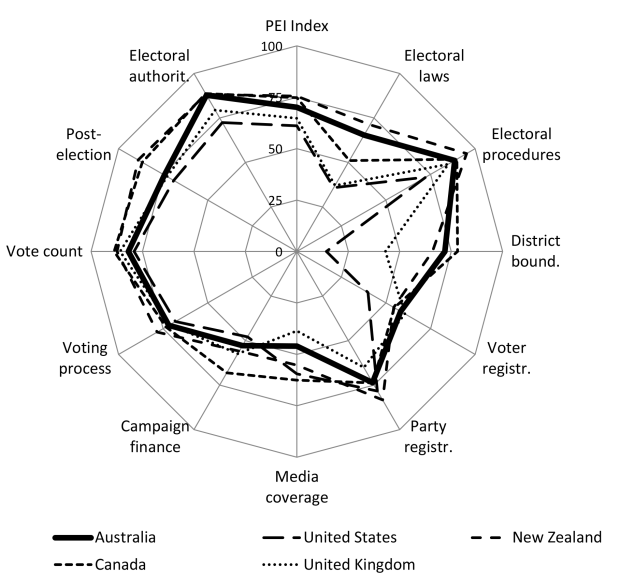 Overall, all eleven sub-dimension of electoral integrity score well above the global average. Only the areas of campaign finance and media coverage of the contest does Australia perform relatively poorly. The media dimension even ranks lowly in global comparison (Australia: 46 out of 100; global mean: 47), while all other dimensions are placed well above the world average.

In sum, with the exception of media coverage, the surveyed international and domestic experts clearly see Australian elections as very well administered and in the top 15% of elections worldwide.

The second data source, the Australian Voter Experience (AVE), paints a different picture. AVE is a 3-wave panel survey designed by the Electoral Integrity Project to gather the views of a representative sample of ordinary Australians just before and after the 2 July 2016 federal elections.

The survey monitored Australian voters’ experience at the polls, perceptions of the integrity and convenience of the registration and voting process, patterns of civic engagement, public confidence in electoral administration, and attitudes towards reforms, such as civic education campaigns and convenience voting facilities.

The AVE report shows that a substantial minority of the public express doubts about the integrity of the electoral process and outcome. In particular, about one in four Australians believe that fraud occurs ’usually’ or ‘always’ during Australian elections (see Figure 2), with this proportion rising among supporters of minor parties, the less educated, women, and the younger generation. Moreover, four out of ten Australians believe that fraud is likely to affect the outcome of elections. These perceptions give cause for concern, because this coincides with mistrust in the Australian parliament, political parties, and politicians, more politically cynicism, and dissatisfaction with the overall performance of Australian democracy.

Mass perceptions of electoral integrity thus diverge from elite perceptions to a stunning extent. The fact that a quarter of the public is rather distrustful of the process should be a warning sign. Especially given that election experts do not see much reason for such concern.

Clearly, further investigation into this divergence is needed, and both, the PEI and the AVE dataset can be used for this purpose. A first analysis of the data finds that public mistrust is not randomly distributed but rather clusters in certain segments of the population. In particular, political sophistication (measured by political knowledge, formal education, and awareness of the voting system) was linked to trust in elections; those who were more informed about politics had higher trust in the electoral process.

Although elections work very well in Australia, when compared to other countries, it is important to consider how to restore public confidence. This could, for instance, be achieved through strengthening transparency, targeted information campaigns, complaints mediation mechanisms, and/or the use of secure digital registration and balloting processes.

Max Grömping is a PhD candidate at  University of Sydney