Interest Groups and the High Court of Australia

Presumably, the opportunity to influence judicial decision-making would compel interest groups to intervene as non-parties in court cases. Non-party submissions can supplement the arguments of a party or contribute new information to judicial deliberations.[1] If an intervener reiterates the arguments of a party, this can enhance the credibility of those arguments.[2] Alternatively, the intervener can provide additional or supplementary information,[3] or unique perspectives to the case.[4]

However, in practice, how common is the use of non-party intervention strategies? My research investigated incidence of intervention in cases before the High Court, the final court of review in Australia.   There are two types of non-party interveners: ‘interveners’ and ‘amicus curiae’. An ‘intervener’ is a non-party that represents their own legal interests.[5] An amicus curiae is a ‘friend of the court’ and seeks to provide the court with impartial assistance.[6]

I analysed data from the Australasian Legal Information Institute (‘Austlii’) database. The dataset contained all Australian High Court cases between 1980 and 1 August 2015 where an amicus curiae or an intervener had made a submission to the court. The aim was to investigate both the volume of intervention and the types of individuals or groups that were granted leave to intervene. The amicus and the interveners were coded by ‘type’ – 13 broad categories based on their characteristics and activity (see Figure 2).

Research from other countries, particularly the United States,[7] Canada,[8] and countries of the European Union,[9] has considered interest group intervention in court proceedings. In Australia, however, there is comparatively sparse existing research on this topic. A notable exception is prominent constitutional lawyer George Williams’ article, The Amicus Curiae and Intervener in the High Court of Australia: A Comparative Analysis.

As an example, in 2013 the High Court of Australia handed down a total of 60 judgements. Only six of the 60 cases involved an amicus or an intervener.[10] To put this in context, the comparable Canadian court, the Supreme Court of Canada, generally allows interveners to make submissions in about half the cases heard.[11]

The approach of the High Court in Australia has been to ‘respect the primacy of the parties’.[12] Both the practical barriers to litigation strategies (cost and expertise), and jurisprudential barriers means that interest groups are rarely granted leave to intervene. This means that in Australia non-parties have less opportunity to influence the nature of judicial proceedings, and aspirationally, effect policy change.

The number of non-party interventions has increased since the 1990s

While incidence of interventions is still relatively rare, there has been a slight increase since the 1990s. 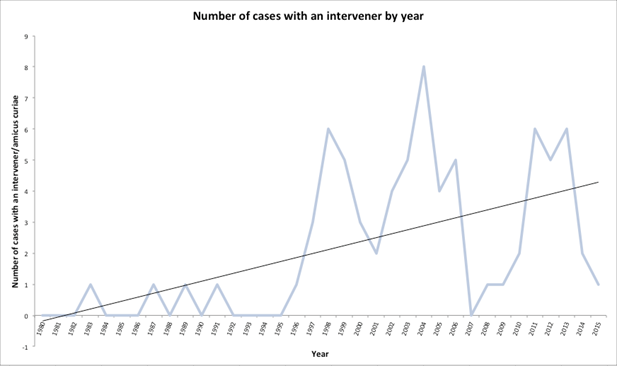 Why might this be the case? One explanation for the increase in interventions from 1995 onwards offered by George Williams is that groups have been increasingly likely to use the High Court where rights and interests were not advanced through parliament.[13] Williams attributes this trend to the perception, particularly among Australians with little political influence, that litigation strategy in the High Court is a means of achieving social change.[14]

An alternative (or complementary) explanation for the slight increase in non-party interventions is that the courts have been more generous in allowing submissions from non-parties. Further research into the subjective motivations of interest groups seeking to intervene might support these explanations.

All interveners and amicus that made submissions between 1980 and 1 August 2015 were coded by ‘type’ (see Figure 2). Most amicus were classified as ‘national interest organisations’ (28 out of 50). There were also five ‘local interest groups’ and five ‘federal government stakeholders’ who were granted leave to intervene.

The difference between the types of groups intervening as amici curiae and as intervener could be due to the different practical requirements for being granted leave. An intervener must establish a legal interest in the case, while an amicus need only possess the capacity to provide submissions from a specialised viewpoint or in defence of a public interest.[15]

Another significant practical consideration that may influence the decision to litigate is that the court can make an order for costs against an intervening party. Before intervening, the group or individual should be confident that they possess the necessary funds.

Only for the bold

Non-party intervention in court cases is not for the faint hearted. However, if the intervening party is able to promote their overall aims through litigation, the flow-on effects can be significant and far-reaching.

One thought on “Interest Groups and the High Court of Australia”